Hailstorms cause large damage to vehicles that are not properly garaged. If it’s a big storm even windshields can break, but the most common vehicle damage is denting of the roof and hood of the car. Hail dents can be as small as a thumbnail and some can measure a few inches in diameter. Removing these dents requires a special technique, called Paintless Dent Removal.

What is Paintless Dent Removal

Paintless Dent Repair or Paintless Dent Removal (PDR) is a process where dents with up-to a few inches in diameter get removed from the car body without using  any of the conventional methods that require sanding, body filling and painting which takes a lot of time and is expensive. This process is performed by using specialized tools and techniques developed for this kind of job.

Although some think that paintless dent removal is an easy and straightforward process, it is a very skilled work and not everybody can perform a proper PDR. Removing small dents without damaging the paint requires highly trained technicians that can analyze the location, depth, size and shape of the dent so that they can properly perform the extraction process without creating sharp angles between the dented and undented surface in order to avoid paint damage.

The images below are from a Paintless Dent Removal work our technicians have done on a Grand Cherokee SUV that had dents on the roof that the owner wanted removed without damaging the paint of his new SUV.

The PDR technician first started by removing the tail gate so he can gain access to the back of the roof and carefully work on the dents. He then worked on the larger dents, and then on the smaller ones. There were a few larger dents that needed more work but with every step the dents were smaller and smaller until the technician flattened out the body work completely.

After all the dents were removed, the technicians put back the rear door, connected all the wiring, and the car was ready for pick-up.

Thanks to the highly skilled work the technician performed, the roof of the car was as good as new. All the dents were removed, there was no damage to the paint and the car looked as if there were no dents ever.

In this case, the Mercedes had a severely damaged front bumper, the reinforcement beam was deformed, and there was damage to the fenders on both sides. Take a look at the image below. There is plenty of damage on this vehicle but on the positive side, the headlights and hood were intact so the dollar damage was not as big as it could have been.

We stripped out all the damaged parts and panels to prepare the vehicle to be shipped to our sublet shop for engine removal. The collision was significant and in order to do a solid repair job, we needed the engine out of the engine bay so our body technicians can make the repair to meet factory specifications.

With the engine and damaged parts out of the way, our auto body technicians did the necessary body work on the panels that could be repaired, and replaced all the parts that were beyond repair:

The repaired and replaced panels were painted, the Mercedes was then reassembled for an invisible repair.

Our Snowmass client was very happy with the end result, the time of repair and the reasonable price of this collision repair project.

Collisions in the Aspen-Snowmass-Basalt area are quite common especially during the snow season. Any kind of accident can be stressful for the vehicle owner and it is even more stressful when you cannot find a reliable auto body repair service.
High Tone Auto Body is focused on getting you the best possible auto body repair service and we have served countless clients from Aspen, Snowmass, Carbondale, Basalt etc.
Recently a Honda CRV owner stopped by the shop. The vehicle was in a relatively small collision but the damage wasn’t that small.


As you can see from the images here this Honda CRV had plenty of damage:

Our technicians follow an industry-specific repair workflow to ensure proper auto body repair so the vehicle can be as safe and nice looking as before the collision.
Here, we started by removing the tailgate from the vehicle and our auto body specialists worked on restoring the geometry and look of the back side of the car. After the repairs on the door frame and roof we had the area repainted with a few coats of paint and clear coat.

Bumpers are composite parts, and in this particular case the plastic shielding took most of the impact and was broken. When the plastic shielding is broken we replace the entire bumper because bumpers act as safety buffer zones, protecting people in the vehicle, as well as people around the vehicle (bumpers are designed to cushion pedestrians in case if they are in a car accident). The new bumper also got a coat of paint and a coat of protective clear coat.

The rear stop lights on Honda CR-V’s are positioned relatively high, so the only damaged part was the outer glass. We replaced the rear stop light with a new one and did all the necessary wiring checking to make sure that everything works as it should.

While one team did work on the vehicle itself, another team did the needed body work and paint on the tailgate. With the tailgate repaired, our technicians assembled the Honda CR-V and the owner was quite pleased with the quality of work and timely repair.

Here we have a Toyota minivan from Alpine Valley Services sitting in our repair shop in Basalt with:

As you can see from the images provided below the rear end of the car is quite damaged and all that caused by a fallen tree. While parking under trees comes somewhat naturally, we should be careful how and where we park. A quick glance at the tree could have saved this car from such a damage.
In order to fix this Toyota minivan and bring it back to its original state, we started by removing the rear window and the rear door. To protect the rest of the vehicle we covered the undamaged parts with protective sheets and performed the needed body work that covered straightening of the rear pillars and dent removal procedures to straighten the rear panels. All repairs were done by following factory measurements so that the restoration would meet original factory specifications.
After the finished metal work and needed wiring repairs the Toyota minivan got a few coats of matching paint on the damaged roof section and the rear pillars. The door was deformed so our technicians performed the needed body work to insure proper opening and closing. After the metal work was finished the door too was painted with matching paint.
After the paint job was completed, we mounted the new rear window according to factory specifications, mounted a new rear door lock (the original was damaged). We also replaced the rear wiper that was also broken. We connected the wiring for the wiper and plate lights and fine-tuned the door lock for proper locking.
Lastly, we repaired the interior trimming to bring this minivan back to its pre-damage state. The Alpine Valley Services representative was happy with the speed and quality of repair work we did on this Toyota minivan. 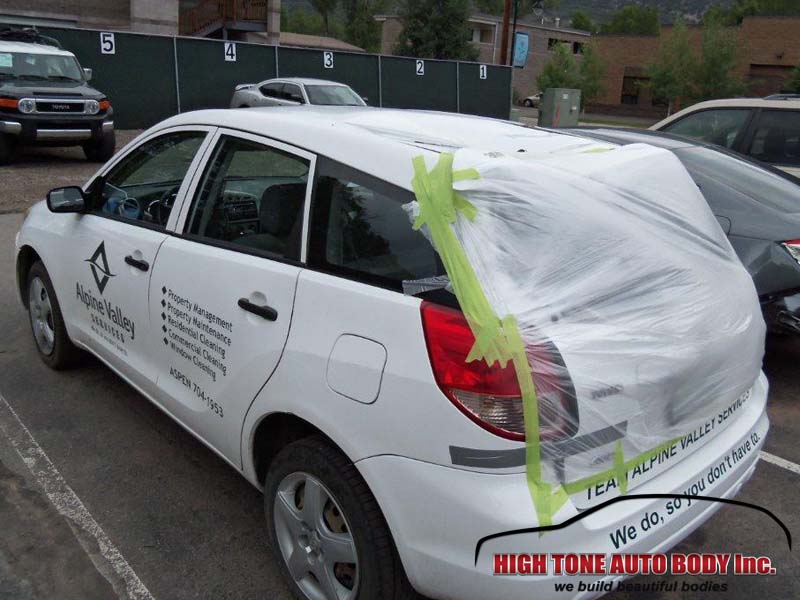 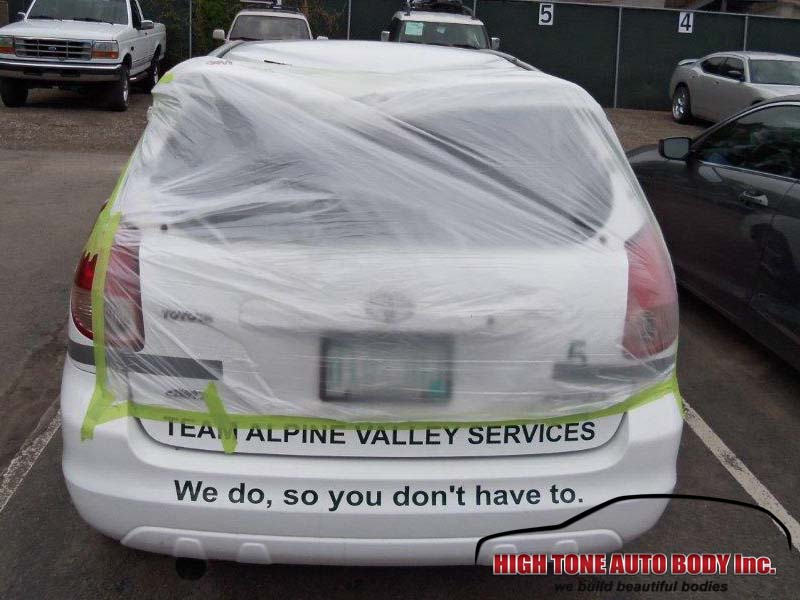 Animal encounters are quite often, and in some cases these encounters sound a bit strange…but this is only a reminder that wildlife acts unpredictably and we should be careful in how we leave our vehicles, and what we leave in them.

Below is a series of photos from a damage done by a small bear that somehow got locked inside a Honda SUV and did considerable damage on the interior. Luckily, nobody was hurt and the bear had left the car by the time its owners returned.

As you can see from the images, the bear that got stuck in the vehicle did quite a bit of damage.

On the back seat the bear did some damage on the seats themselves, broke off some trimming in the boot area, took off some plastic panels in the passenger area and broke off the sun roof. Also, it marked the vehicle with its poop in the boot area to make things even worse.

The vehicle needed some replacement plastic trimmings, some parts for the sun roof, and a complete interior detailing to get the bad odor out.

Usually, bears get close to vehicles if they smell food. Bears have excellent sense of smell and nothing gets by them. To avoid bear encounters like this one, make sure your vehicle is clean of any kind of food: